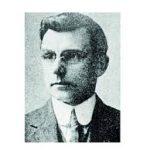 It was in 1895 that a young machinist, Abram (Abe) M. Zimmerman purchased a horse barn in New Holland, Pennsylvania and established a blacksmith shop called New Holland Machine Works. It was here that he used his talents by repairing and making farm machinery for local farmers. As early as 1899, Zimmerman’s blacksmith shop was advertising a feed grinder of his own design for $15.

To supplement his income, Zimmerman began retailing engines. However, his innovative nature soon took over, and he felt he could develop a better engine. By 1900 he had designed and built a prototype of his own stationary engine, and although water-cooled like most stationary engines of the time, he had a solution to “freeze-proof” his engine during the winter months. 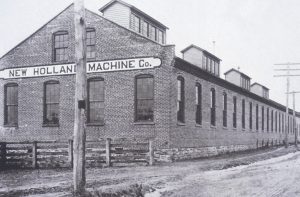 Zimmerman decided to manufacture and sell his new engine. To do this, he incorporated the business and took on some investors. He raised $50,000 by selling 500 shares to his neighbours, renaming the business New Holland Machine Company. Zimmerman was selected as the chief executive at the new company and with this new capital the company acquired a brick factory on Franklin Street in New Holland, Pennsylvania. 40 employees were hired to begin mass-production of the new stationary engine. 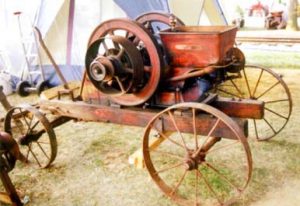 Zimmerman hadn’t forgotten about his feed grinder and was constantly modifying equipment to meet the needs of his customers. The feed grinder was soon offered with the option of being mounted on a wooden or steel truck. Adding one of the New Holland engines (4hp-16hp models) allowed the grinder to be mobile as it could be easily moved around the farm. Success in selling the stationary engines let to a profit of $1,859.40 in its very first year of incorporation and led the New Holland Machine Company to expand into the manufacture of other farm machine products.

The product line was soon widened to include other farm related machinery. By 1911 the company had 150 employees. In 1912 it began manufacturing its own rock crusher, and by 1914 a wood saw was added. By 1927 the employees were numbered at 225.

In 1940, during the depths of the Great Depression, George C. Delp, Raymond Buckwater and Iral A. Daffin, under guidance from Rev J. Henry Fisher acquired a majority interest in the struggling New Holland Machine Company and the four set about putting the company back on its feet.